The Middleman of the Internet

Stripe, the fintech startup that calls themselves the ‘Middleman of the Internet’ was valued at $36 billion as of August 2020. Founded by 2 Irish brothers, Patrick and John Collison in 2010, Stripe has established itself has the premier choice for accepting payments online.

Patrick and John Collison, as sons of entrepreneurial parents, were exposed to the world of business at an early age. Since they got their first access to the internet during their early teen years, they had been developing websites and founding online businesses as a result of that exposure. ‘Auctomatic’, the eBay competitor founded by the brothers when they were in their late teens, was sold to a Canadian company for $5 million, only after 10 months of its inception. The brothers then move to the US where they attended MIT and Harvard, while building mobile apps to fund their tuition. During this time, the two had realized the scale of the opportunities open to them in the online transactions space. In 2009, they dropped out of school and moved to Argentina to work full-time on their new payment acceptance service.

“Necessity” – the Mother of All Invention

During the period, the options that were available to an online business for receiving payments were cumbersome and complex. For a startup, the challenges were even greater. Overcoming the financial barriers to reliably accept payments over the internet seemed more challenging than the work they had to put in towards making their products and services better. It is this very space that the brothers intended to disrupt.

When the Collisons started ‘Stripe’, known as /dev/payments back then, the focus was to solve problems they were facing themselves. As owners of a couple of online businesses, they wanted to eliminate the financial hurdles they were facing when accepting payments. And by doing so, solve the headaches faced by startups everywhere. Little did they know of the impact their new platform would have on the e-commerce landscape. 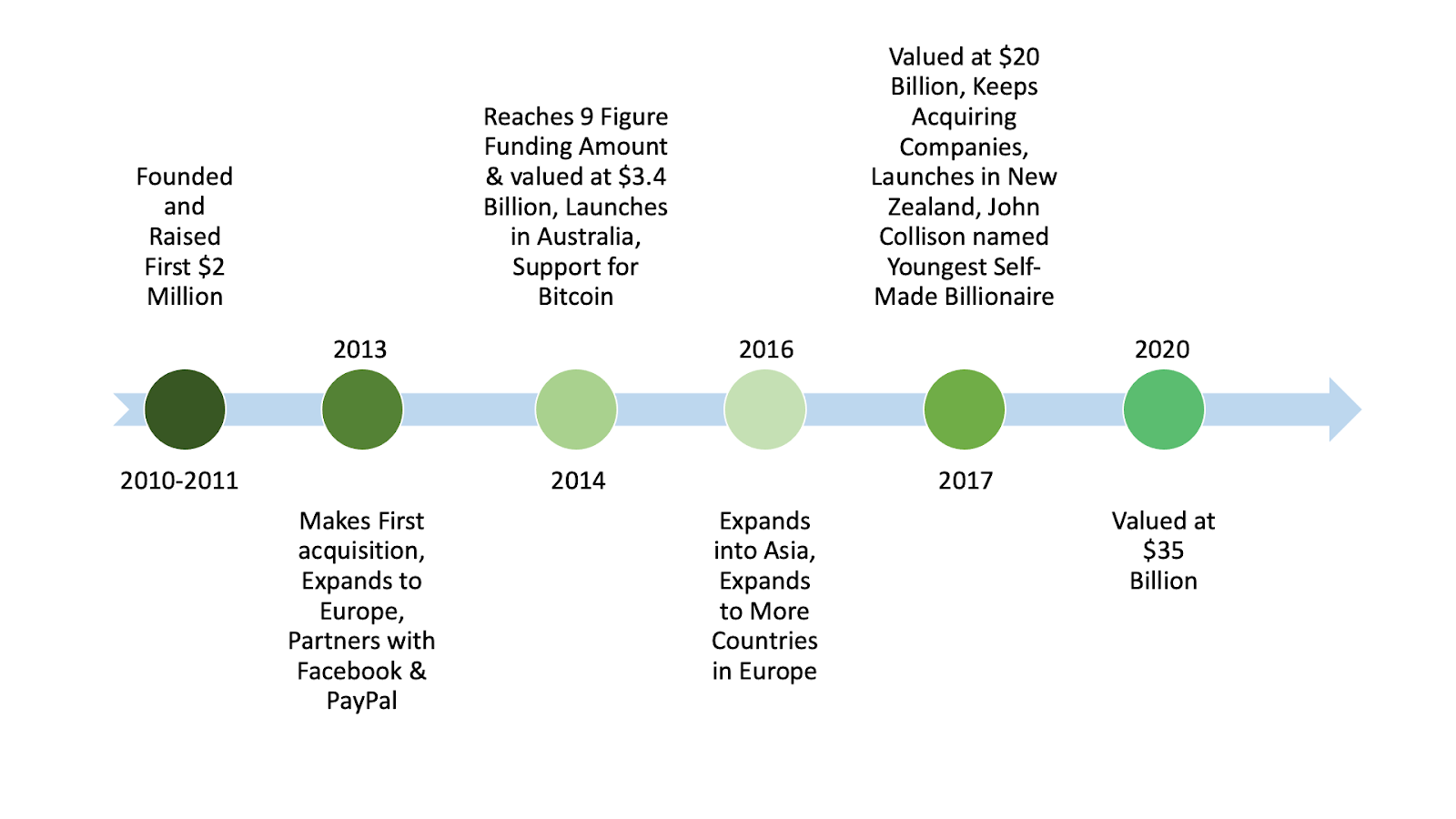 When Y Combinator put their faith in the company back in 2010 with an initial funding, they were able to launch a beta test that would eventually attract more funding from the likes of Peter Thiel, the founder of PayPal. Eventually, Stripe went live in September of 2011, making it available to the public. Stripe saw exponential growth in a matter of months, reaching a worth of $3.4 billion by 2014, after a couple of rounds of funding in 2012 and 2014. They were making all the headlines as they were able to secure funding from the likes of Sequoia Capital and Amex Ventures. By the end of 2019, Stripe was valued at an astounding $35 billion. At present, Stripe is not merely a platform for receiving payments. They have diversified their business by introducing services such as Radar, a Machine Learning powered credit card fraud detection platform, an end-to-end business formation service named Atlas and their most recent endeavor, ‘Issuing’. A platform that white-labeled credit cards for businesses, offering a percentage of the fees as a cashback for their business customers.

The future clearly seems promising for Stripe. As does the future of fintech. It is estimated that in 2018 alone, 50% of the transactions made by Americans online used Stripe. It seems though that we have only started scratching the surface of the potential of fintech. Startups such as Stripe and Robinhood are spearheading that very revolution.

Texus believes in empowering our employees to go that extra mile in achieving their entrepreneurial dreams. In the same way Stripe’s investors believed in the Collison brothers, we are fueled by our team’s passion towards bringing their ideas to life. From innovative POS solutions to disruptive tech in consumer and retail spaces our foothold in the FinTech space is in a rapid expansion phase. The next big thing in FinTech is in the works. Get in touch with us to learn more.